How to use the optocoupler for the reliable switching

Generally, it is an element used when transmitting signals between isolated circuits, but it also used the place where the ground level is different even if they are electrically connected. 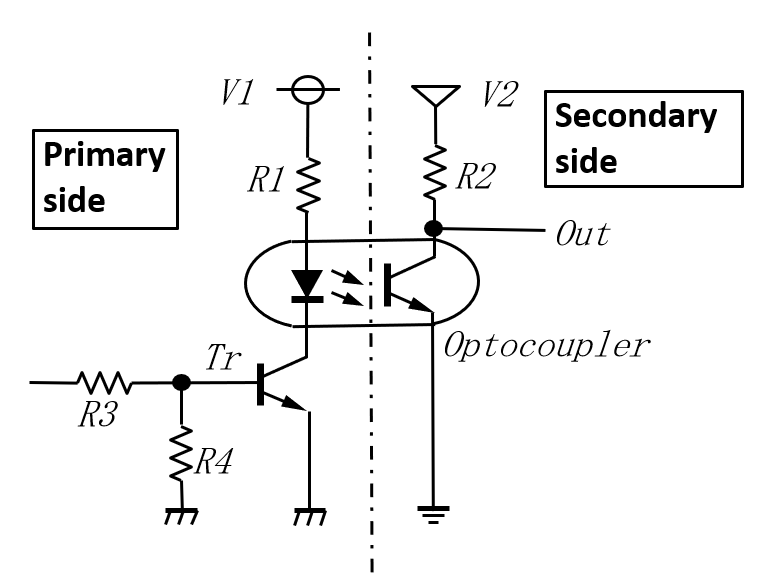 The specific uses are as follows.

Actually, it is troublesome to think about, but the design rules for mass production are as follows.
The current transfer ratio (CTR) when you design is determined by the following formula.

The maximum current passed to the transistor side is about 30mA.
I’d like to explain step-by-step below. 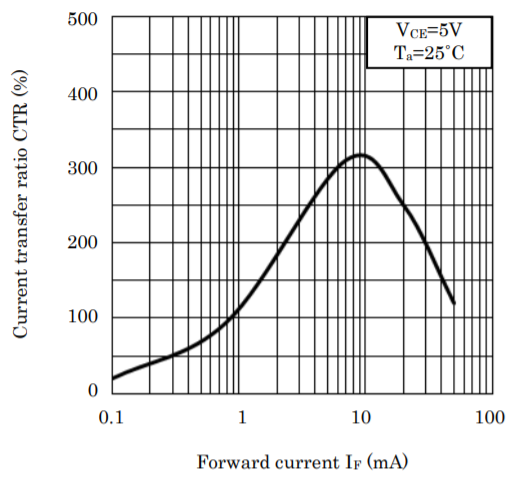 Fig2. CTR vs Forward current IF

If you look closely at this graph, it says VCE = 5V.

This means, "Although the current transmission is 300%, it does not turn on completely, and the VCE of the phototransistors has the voltage of 5V."

Few people use it this way.

Let's check the contents related to VCE from another characteristic graph, Fig. 3.
At VCE = 5V, at IF = 10mA, Ic = 13mA (indicated by the orange line), which contradicts what was written earlier as 300%, but the CTR of this photocoupler starts from 50%. There is a wide range up to 600%, so if you used the one with a CTR of 280% in the previous graph.
It would you mean that the characteristic graph this time was measured with 120%.
Every time, I'm worried about how to describe this kind of characteristic graph.
If you use it for switching, I want VCE to be at least 1V or less.
That is, I want to bring the state of the phototransistor to the left side of the blue line added to this graph.
Then, the current transmission ratio is shown in Table 1 below.
Somehow it has fallen below the CTR listed in the datasheet.
I think that it is kinder to the user to write the value when VCE = 1V for CTR, but why every manufacturer uses the same description.
Is it decided by the industry association? 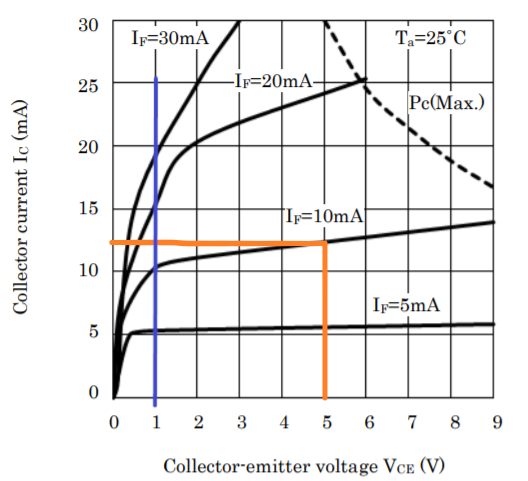 2.3        Current transmission ratio (CTR) that changes depending on the ambient temperature 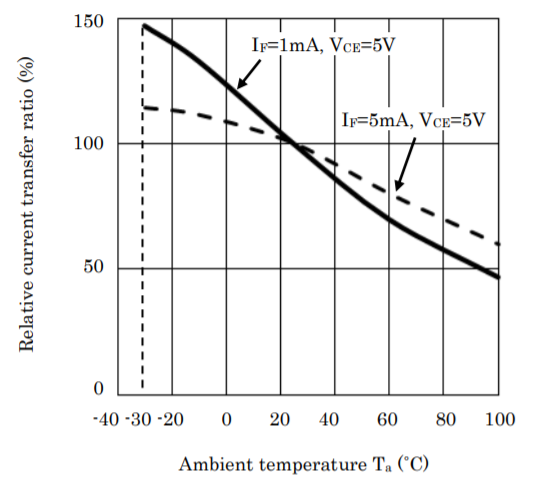 Precautions for aging deterioration in the case of PC817, it is described as follows.

There are many doubts about its value. CTR decreases when current is continuously applied to the LED, but some manufacturers disclose the change due to the current value and energization time in a graph.
My feeling is that if the current is about 5mA, the decrease is 20% or less. Detailed materials may come out when you contact the manufacturer.

From the above, let's calculate the CTR that should be considered at the time of design. Rewrite the formula mentioned at the beginning.

Let's apply this to the design of an actual optocoupler.

There is no graph when IF = 10mA, but it is almost like this.

The photocoupler PC817 has four CTR ranks A to D, and the CTR when the IF is 5mA is listed. Each value is as follows.

This means that if you try to flow 10mA to the secondary side, you must flow 10mA / 0.7 = 14m to the primary side to configure a highly reliable circuit.

Some people use optocouplers at full rank without specifying the rank, but I do not recommend it. If the minimum CTR listed in the datasheet is 50%, it becomes 17.5% in this case.

I always use one of its lowest CTR being 200 or above.